A set I created in 2013 which emulates the Topps Inception Look.  I will create a number of customs in this set, but the primary set will be a tribute set to the USFL.

One of the original dual threat Quarterbacks, Mr. Lewis often doesn't get the credit he deserves for his pioneering of the position.  He returned 3/4 customs (K1AO) in 37 days.  This return leaves one team remaining.  I have the card made, just have to send when I get confirmation that the athlete is signing again.

Really struggled to find a good quality pic of a Bulls alumni that signed consistently.  After some digging, I finally found a good pic of  former Bulls QB Matt Ferguson.  He returned 3/4 customs (K1AO) in 18 days.  This leaves me with two teams to go... I have one out, and one to send.  Getting excited! 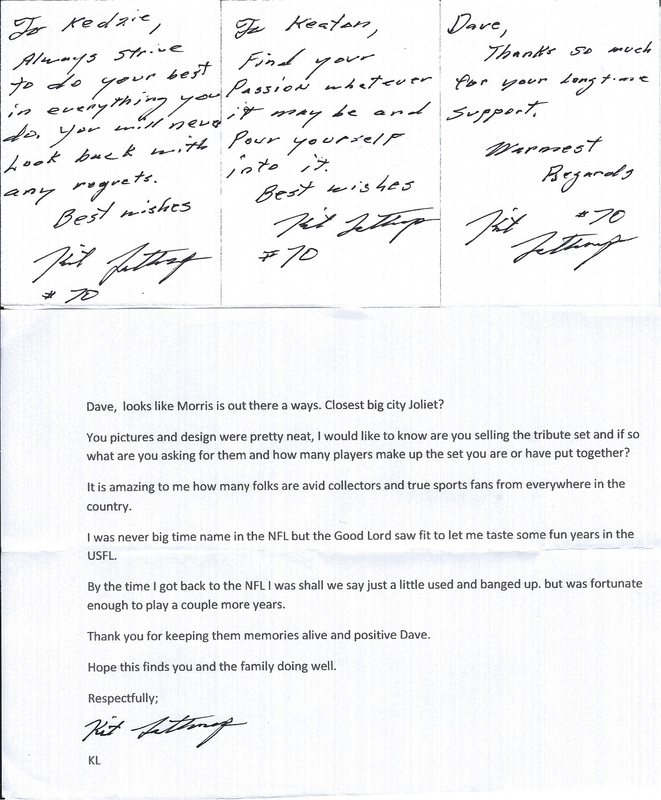 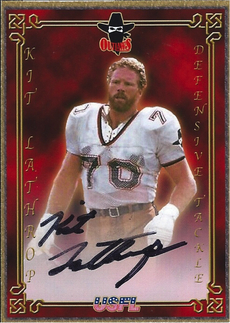 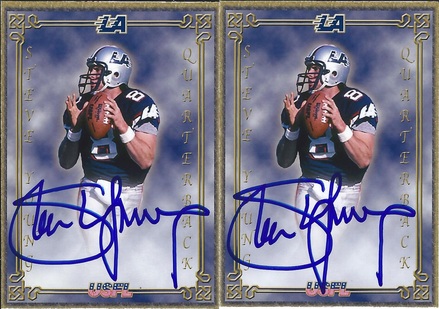 Finally... the other big one from this set came home.  Mr. Young returned 2/2 via his foundation in just over six months. 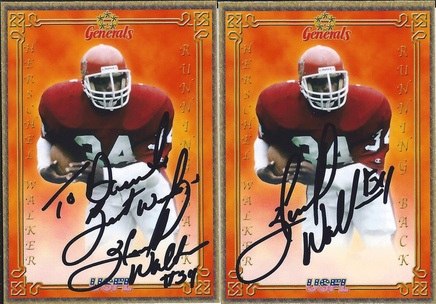 Took awhile, but Mr. Buggs returned 3/4 customs in 136 days via his home.  K1AO, postmarked from Atlanta. 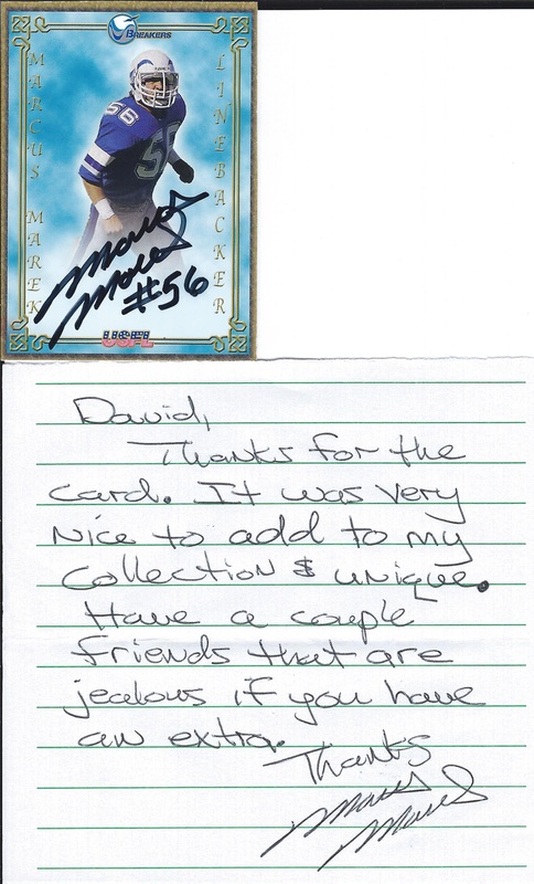 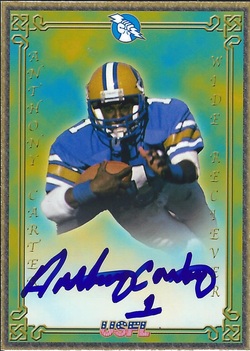 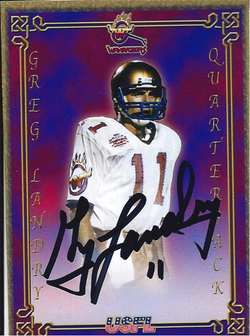 Although I really wanted him for my Blitz card, I had to settle for him in a Wranglers uniform.  Returned 1/2 customs (K1AO) in 67 days via his home. 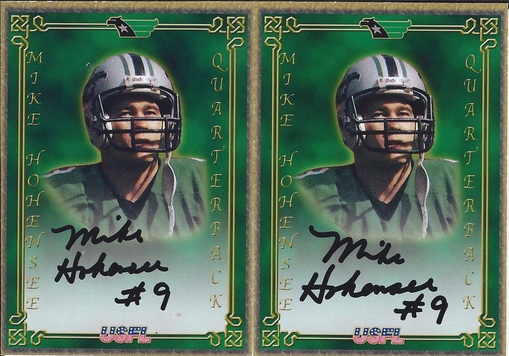 It was IMPOSSIBLE to find any good color shots of the Washington Federals... especially anybody worth trying to pick up.  I ended up using an image off an 1984 USFL Card to put this together.  Not my favorite picture, but one of the signatures I most wanted back.  Coach Hohensee has had a great career in the Arena League since his playing days and I'm glad this one came home.  8 days door to door, returned 2/2. 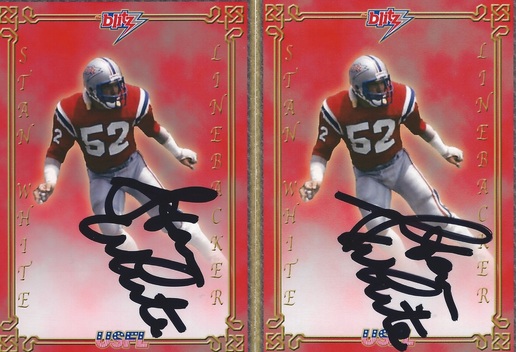 Sent 3 customs to Mr. White, he returned 2 (K1AO) and included a note thanking me for the cards.  8 day turnaround. 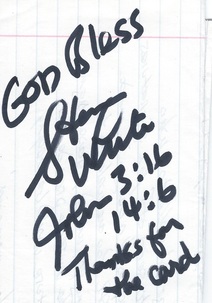 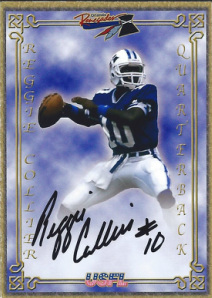 Took a shot on this one.  Mr. Collier is not a big signer, but he came through for me.  Sent to his work and he returned 1/2 customs (K1AO) in 11 days.  Awesome return! 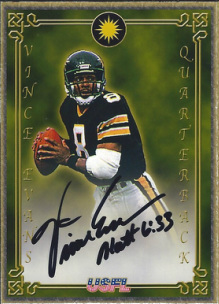 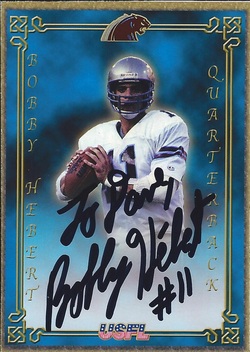 Three out of the first five are home.  Mr Hebert returned 1/2 customs (K1AO) in 11 days via his home. 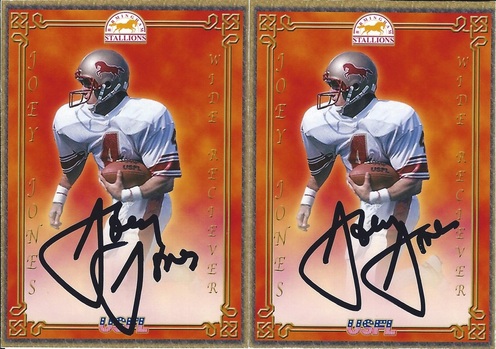 10 days door to door.  The former Stallion returned both customs. 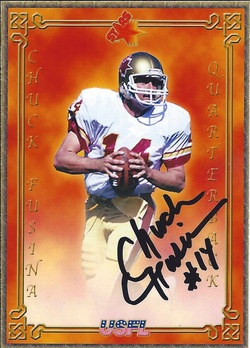 My first return from the USFL set that I have created, and it's a great one.  Mr. Fusina returned 1/2 customs (K1AO) in 6 days via his home.